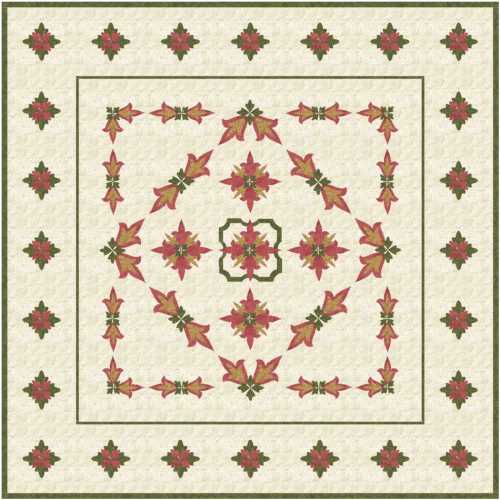 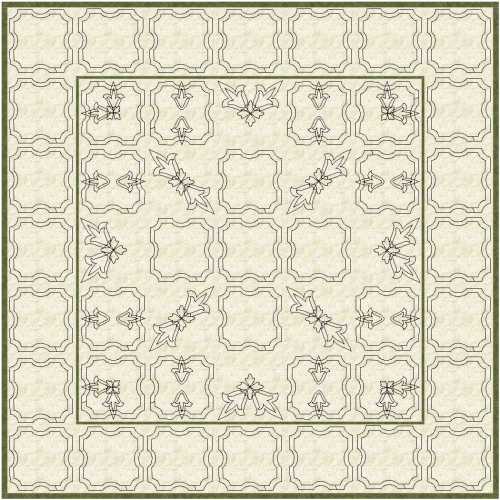 The virtual quilt design to fill in around the applique outlines. 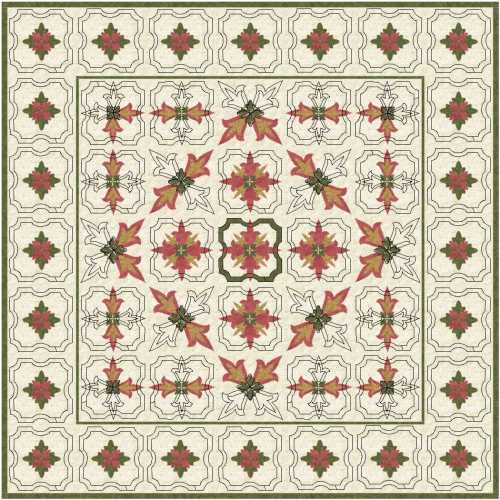 The markings in place. 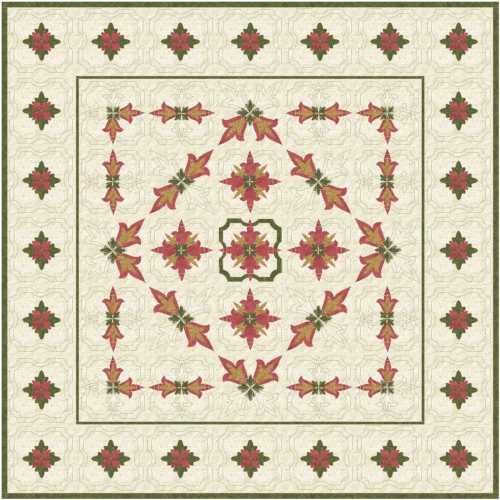 The real deal finished would look more like this!

This is not the only way this design could be quilted, and there are some things I would change, but I would keep a lot of the quilted frames, particularly around the outer border.

For most of my life I have had to try to explain the plans I have had in my head when people have asked me what I am doing, while others just pulled out the book, magazine or pattern for the project they were making.

Now I can show you a plan with colour pictures for a quilt I will never make … which is just like the quilts in the books, magazines and patterns as I won’t be making them either.

As I usually do at a quilt sewing get together I was wandering around looking at what people were doing, and chatting about the world in general and discussing which thread or fabric should go where.

One of the girls had just done a wander around of her own, getting to my spot after I had moved away, and she arrived back at her table just as I arrived there and she asked me about the project I was quilting.

I tried to explain that I was working on my own design and had produced the pattern for it, which she could purchase from me if she wanted too, after I finished the quilt and took a photo to put on the front of the packet, She spent the next ten minutes trying to tell me that I wasn’t allowed to publish a pattern because that was breaking copyright, and had no understanding that as the designer I was the owner of the copyright.

After all, I had a pretty picture (because it was designed in EQ), and she couldn’t comprehend that the picture I had printed from Electric Quilt was all designed and printed from my computer before the project was started.

I learned that day that some people have no concept of designing or copyright.

I also learned that the patience I have when making quilts is not replicated in trying to explain copyright to someone who is not prepared to listen … but I did show restraint and didn’t use any of the sharp objects in the room to damage any property or any body!

Yesterday I was cutting some threads and being a woman and able to do two things at once I also cut my finger with one variety of the sharp objects. Didn’t bleed on the project though, not that would have been too heartbreaking as I was making grocery shopping bags from old curtains, lined with old sheets.

I am a quilter who designs many more quilts than I will ever make, and I am sharing one quilt design every day in Virtual Quilter. I also share my completed projects in Stuff-Ups, and Christmas decorations in Christmas Everyday of the Year.
View all posts by Virtual Quilter →
This entry was posted in Anna Pavlova and tagged Applique, Copyright, Patchwork, Pieced, Quilt, Quilting. Bookmark the permalink.

You are welcome to add your comment Cancel reply

This site uses Akismet to reduce spam. Learn how your comment data is processed.